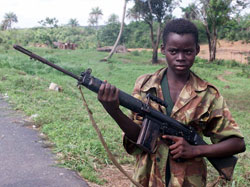 The tragic death of an 8 year old boy in Connecticut provoke me, why did his father chose an Uzi? It is well known that other machine guns like AK-74, AK-47, AG-3 and M16 are much more suitable for children because they have longer barrels.

Armies are also giving these to kids because they are easy to strip, reassemble and they are fairly easy and safe to use. This is common knowledge among armies that use children in war, in Cambodia, Sri-Lanka, Ethiopia, Angola, Mozambique, El Salvador and Peru – so I don’t understand why Connecticut chooses Uzi. When the short barrelled gun recoils the gun mostly moves upwards and if the user does not let go of the trigger the weapon will continue until it points at the user. All kids with weapon knows this. Why not the people in Connecticut?

Its very sad for this kid and his family, my thoughts go to them. But we all should respect that this is the way of life, in Connecticut.

Link to the murder.
DB : Dagbladet.