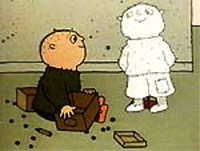 Isn’t it wonderful sometimes to have someone to blame when something happens? In the papers today I read a lovely story from Sweden in 2006. A now 23 year old driver were caught driving while drunk, but he refused being responsible for driving. He blamed Skybert/Molgan, Alfie Atkins’ secret friend. (picture of him to the left)

Most times the police would laugh such things off, but in this case they couldn’t prove that he was lying – yesterday the court in Varmländ dismissed the charges due to the lack of evidence. Isn’t it surrealistic? Now the young man has filed a complain for being hurt economic while the police kept his drivers license. It is kind of funny, yet tragic – I have nothing left for drunk drivers..

It remind me of another story where a couple were out partying, the husband didn’t drink – he was the night’s driver. The wife had a good time and had plenty to drink. When they were about to end the evening the husband twisted something in his back and couldn’t move so the wife helped him in the back of the car, she decided to drive home. Halfway home the police stopped them, the officer leans toward her through the window and looks in the back seat and says ‘ah, someone had too much to drink here – please go on and get your husband home’. I love that story.