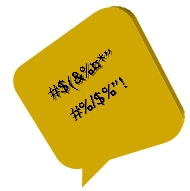 I read in Norwegian newspapers today that a woman were told to stop swearing while having birth. ‘To lie there and call for the devil will only cause you more pain, and then you deserve a rough birth. But if you like, we can rather turn to someone else and pray to Him together, then this might go well’ the midwife had uttered.

I am a man and can’t imagine how painful a birth is, I’m not sure if I even want to think about it.

But I do understand why women swear, I understand that it won’t help to holler ‘oh darn’ instead – I think women need something powerful to utter, right?

Now this midwife has all rights to say that she doesn’t like swearing, I can fully support that. But the way she did it is unforgivable – she destroyed an event that were supposed to be beautiful. Painful but beautiful. The woman giving birth were scared and didn’t open her mouth again during birth – that is sad.

People in Norway have split opinions on this, most is annoyed by the midwife’s behavior but some are defending the midwife. Christians have later today come out and asked for understanding, that they get sad when people swear. I respect that, but I don’t respect people judging others. If the midwife can’t take some swearing she has the wrong job if you ask me. Do you agree?

What right did that midwife have to judge the woman and scaring her by saying the birth won’t go well if she continues to swear?

The midwife has been reported and hopefully she will lose her job.

Today (March 23 2010) it was finally announced that this midwife has lost her authorization, good riddance I think.

Links to the articles, only in Norwegian though, I tried Google translate but that was a joke :

Quickbabynames – Meaning of Names, Baby Names and their Origins

Over 20,0000 meaning of names and baby names statistics, all searchable by origins, style, impression, popularity.