Near revolution in Norway

We’ve had a lot of pollution lately and they have measured it to be way above allowed level. It reminds me of China and the olympics, didn’t they do the same?

They have initiated free buses but they have too few drivers so the route buses are struggling with delays.. Funny?

They are also reducing speed limits from 80 to 60 and removing lanes so one of them can be used to commuting. I picture long queues tomorrow morning..

The No2 measurements were way above allowed level, this is the last 72 hours: 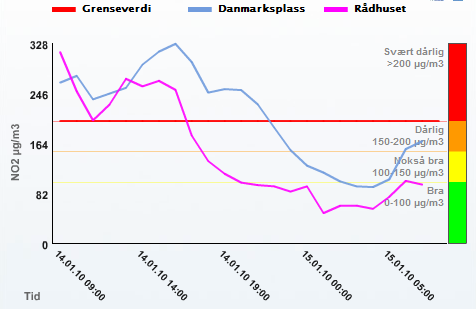