You might remember Kurt Nilsen who won the World Idol in 2004, the former plumber who surprised the whole world. Hes had his ups and downs and earlier this winter one of our newspapers, VG, slaughtered his new Christmas album. VG is in charge of the largest top 10 chart list in Norway. Heres the review (in Norway media gives dice counts as grade) 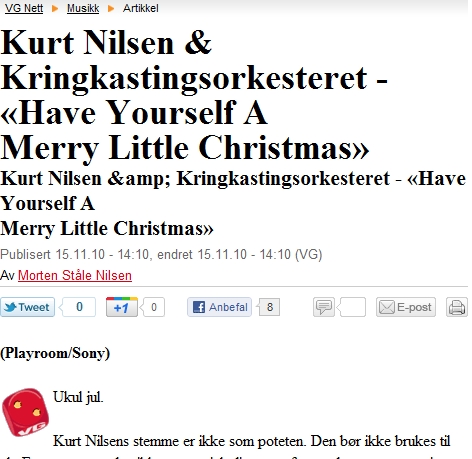 It says; “Kurt Nilsen’s voice is not like the potato. It shouldn’t be used for everything. One of the genres its not fitting, is the “crooning” type that influences half the album “Have Yourself A Merry Little Christmas”. And they gave him a 2 of 6.

Tonight VG has written an article that says “The record autumn’s tops and flops” and Kurt Nilsen’s album is the second best selling album in Norway! Now that is a sweet revenge if you ask me. 🙂